History of the Lord Mayor’s Show Gog and Magog

Towards the head of the procession you may see two stern but benevolent wicker giants. They are Gog and Magog, the traditional guardians of the City of London, and they have been carried in the Lord Mayor's Show since the reign of Henry V.

The matter of Britain

Gog and Magog, or sometimes Gogmagog and Corineus, are descended from mythical pagan giants and their origins lie in mediaeval legends of the early British Kings. The story goes that Diocletian – the Roman Emperor – had thirty-three wicked daughters. He managed to find thirty-three husbands to curb their unruly ways, but the daughters were not pleased and under the leadership of their eldest sister Alba they plotted to cut the throats of their husbands as they slept.

For this crime they were set adrift in a boat with half a year's rations, and after a long and dreadful journey they arrived at a great island that came to be named Albion, after the eldest. Here they stayed, and with the assistance of demons they populated the the wild, windswept islands with a race of giants.

Some time later Brutus, the great-grandson of Aeneas, fled the fall of Troy and by way of various scrapes arrived at the same islands. He too named them for himself, so we also know them as Britain. With him he brought his most able warrior and champion Corineus, who faced the leader of the giant brood in single combat and eventually hurled him from a high rock to his death. The name of the giant was Gogmagog and the rock from which he was thrown became known as Langnagog or 'The Giants Leap'. As a reward Corineus was given the western part of the island, which came to be called Cornwall after him. Brutus travelled to the east and founded the city of New Troy, which we know as London.

The full story can be found in Geoffrey of Monmouth's twelfth century Historia Regum Brittaniae, a largely fanciful (but hugely influential) history that connects Celtic royalty to the heroic world of the Greek myth by way of the old Welsh legend of King Arthur. The alert reader will have noticed that the fall of Troy was about 2300 years before the reign of Diocletian and that the name Gogmagog is a mangled borrowing from the Old Testament, but these histories were accepted as fact for centuries and would have real importance to the mediaeval participants in the Mayor's procession.

It is common enough for people to regard the original inhabitants of their lands as giants. The memory of early struggles for land or survival is preserved in mythology and heroes become giants in the popular mind. They probably were large and powerful men, and their physical strength and stature become exaggerated as their deeds pass into legend. Our pagan giants were not ugly or huge: they are the elaborated folk memory of great men inhabiting a lost age of might and simplicity.

The custom of carrying effigies and images at festivals is sometimes explained as an echo of the days when the same festival would have revolved around a human sacrifice. The victim was replaced with a symbolic representation, and as the old rites were incorporated into the Church the sacrificial effigy became the saint who had made the sacrifice. Whatever one thinks of this theory, the custom of carrying effigies at festivals was widespread in the middle ages both in England and on the continent, and the giants of myth were among them. The tall figures that you will see on the day of the Lord Mayor's Show are just the latest in a long line of pagan effigies that go back at least a thousand years. 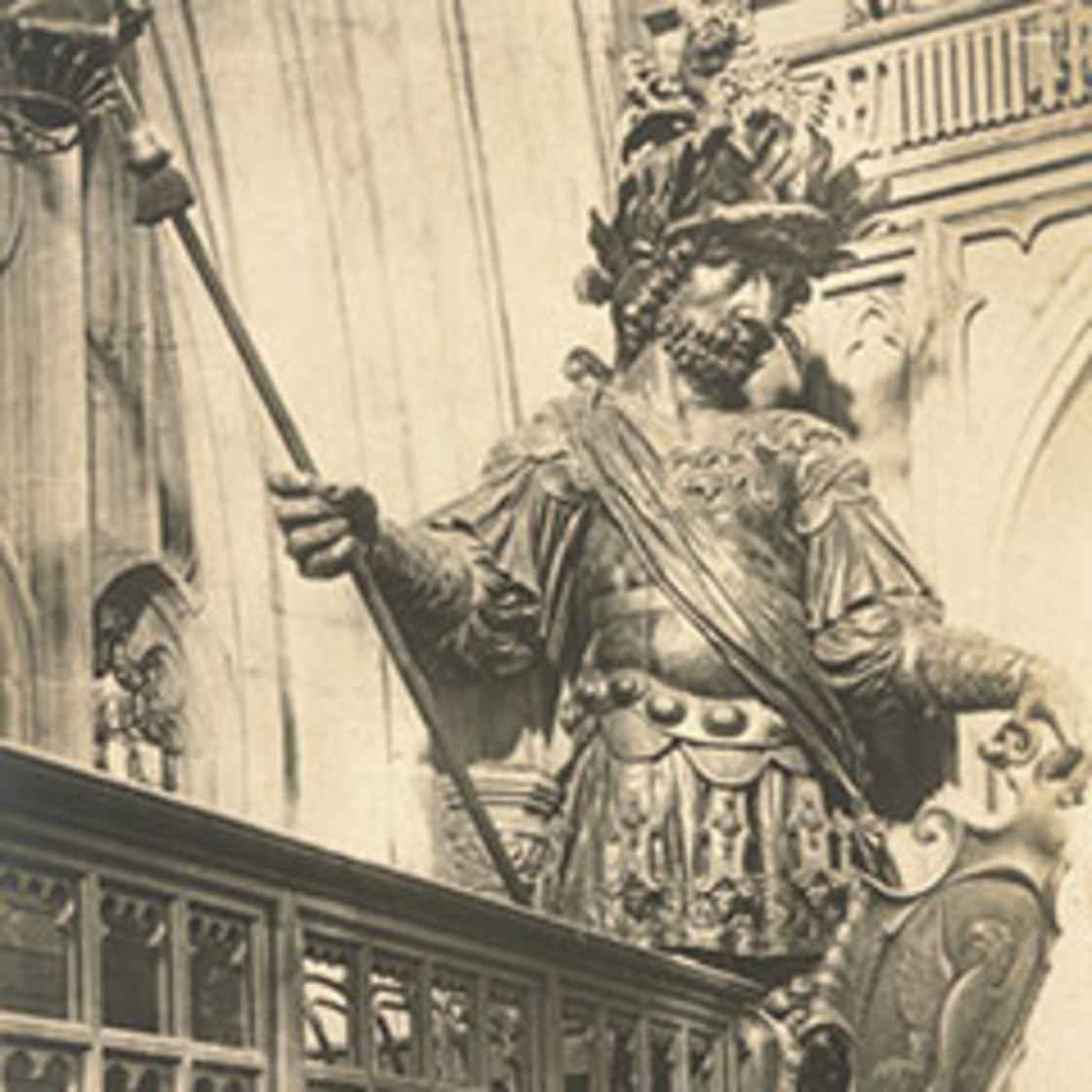 Another version of the story has it that these two giants were the last two survivors of the sons of the thirty-three infamous daughters of Diocletian, who were captured and kept chained to the gates of a palace on the site of Guildhall to act as guardians. However they got there, we do know that by the reign of Henry V there were carved giants guarding the gates of Guildhall. In 1554 they appeared in the Lord Mayor's Show, and in 1605 the Pageantmaster of the day alluded to the giants who appeared in the Procession on Lord Mayor's Day as Corineus and Gogmagog.

In 1672 the Pageantmaster Thomas Jordan referred to the giants as "two exceeding rarities", and stated that "at the conclusion of the Show, they are to be set up in Guildhall, where they may be daily seen all year and I hope never to be demolished by such dismal violence as happened to their predecessors." He was referring to the destruction of much of the City by the great fire in 1666. His giants however only lasted a few years being made of wickerwork and pasteboard, in common with their sacrificial forebears, and were eventually destroyed by mice and rats.

They were replaced in 1708 by a magnificent pair of wooden statues carved by Captain Richard Saunders. These giants, on whom the modeern versions are based, lasted for over two hundred years before destruction in the blitz. They, in turn, were replaced by the pair which can now be seen in Guildhall, and which were carved by David Evans in 1953. They were a gift to the City by Alderman Sir George Wilkinson who had been Lord Mayor in 1940, at the time of the destruction of the Saunders versions.

Gog and Magog symbolize one of many links between the modern business institutions of the City and its ancient history. This is only the most recent of many rebirths, which have long been symbolised by the phoenix on Magog's shield representing return after fire. Today, the words of Thomas Boreman summarise the Londoner's view as well as ever:

"Corineus and Gogmagog were two brave giants who richly valued their honour and exerted their whole strength and force in the defence of their liberty and country; so the City of London, by placing these, their representatives in their Guildhall, emblematically declare, that they will, like mighty giants defend the honour of their country and liberties of this their City; which excels all others, as much as those huge giants exceed in stature the common bulk of mankind."

The Gigantick History of the two famous Giants, and other curiosities in Guildhall, London (volume 1), 1741